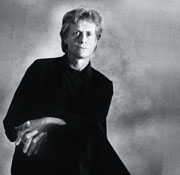 Allan Madsen is an internationally well known artist who has had exhibitions in many countries world wide. Some worth mentioning are USA, Canada, Spain, Ireland and Sweden.

Allan Madsen was born in 1952 in Randers, Denmark and at the age of 5 he and his family moved to Canada.

Between the years 1971 and 1981 he studied and taught music in London - with harpmusic from the renaissance as his speciality. During this period Allan also started studying the art of drawing. In 1981 he moved to Paris, where he continually improved his art at the same time as he did work in Italy and Spain.

In 1988 Allan Madsen moved to Sweden but is currently living in Spain with his wife and three children in the spanish city of Murcia.

What I admire most in Allan's work is that he is a consumate and superb draughtsman. His use of pencil combined with colour washes is quite unique.

I have been a close friend of Allan's for over a decade so I have observed the changes and growth in his work. He has retained his fascination with the sheer application of paint itself in the attention given to those large backgrounds but he moved along to a very personal style in the nudes, both in oil and watercolour.

In all his work my admiration lies in his great ability to draw and of course in what he leaves out, wherein lies the secret of all great art.

You can have a look in Allan's book here.